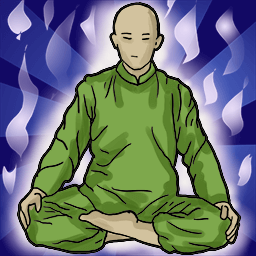 The Forces of Creation grant you the senses of your primitive ancestors, long-buried secrets that have been protected by time are unveiled to your exceptional perception, allowing you to sense hidden objects in your environment.

On success you get 7 perception stat for 22.5 rounds.

The ability known as Primal Senses is one that is shrouded in mystery and legend, passed down through the ages by those who have been gifted with its power. It is said that this ability was first discovered by a tribe of Deep forest barbarians, who used it to survive in the treacherous wilderness of their home.

With their primal senses, these barbarians were able to detect the slightest vibrations in the earth, sensing the approach of predators or prey long before they came into view. They could also pick up on the faintest scents on the wind, tracking their targets through even the densest of forests.

As the ability spread, it was embraced by warriors from all corners of MudGate, who saw in it a powerful weapon that could give them an edge in battle. Whether they were fighting on the front lines or sneaking through enemy territory, those who possessed primal senses were able to anticipate their foes' movements and strike before they were seen.

Today, the ability is coveted by all those who seek to hone their combat skills, and those who master it are highly respected and feared by their enemies.

Abilities are linked to certain classes and can be used by both players and non-player characters (NPCs). To use most abilities, you must first learn them and sometimes invest points into them. Occasionally, you may come across special ability scrolls with a limited number of uses. These scrolls allow you to use the ability even if you have not learned it, but you can only use the ability a certain number of times before the scroll is depleted.